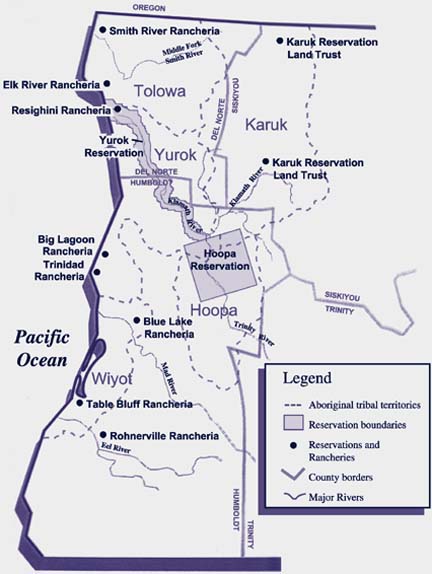 LOCAL NW CALIFORNIA TRIBES — The Karuk, Hupa, Tolowa, Wiyot and Yurok Tribes remain on their traditional homelands to this day. While sharing a similar cultural framework, each of these Tribes has a wholly distinct Tribal language. The Little River is the border between the homelands of the Wiyot and Yurok peoples. The Tolowa are from the extreme northern coast, from the southwestern corner of Oregon to approximately fifteen miles south of Crescent City at Wilson Creek. The Yurok come from the coast, from this point south to just below Trinidad Bay, and up the Klamath River, extending about 45 miles to just before Bluff Creek, where Karuk Territory begins as well as a short distance south along the Trinity. The Wiyot are south along the coast from Trinidad past Eureka to Ferndale, encompassing Arcata and Humboldt Bays, the lower Mad River, and the lower Eel River. The Karuk lands are along the Klamath above Yurok territory further up river to beyond Happy Camp, and along the Salmon River; the Hupa are from the Trinity River just before the junction with the Klamath, especially through the north-south section called Hoopa Valley and south to Grouse Creek. The Tsnugwe people come from the Trinity River area from Willow Creek through the Burnt Ranch area. The Chilula and Whilkut were smaller tribes that inhabited warm interior valleys close to Redwood Creek and the Mad River watershed.

The natural environment, the rivers, mountains and oceans forge the cultural backbone of these people. Living on the abundance of foods, such as acorns, salmon, deer meat and berries life here was remarkably untouched by contact with western society until the discovery of gold in 1849. The quest for gold did not last long and our people live in one of the few areas that remain culturally intact and for the most part were separated from the influence of America until the early 1900s. Our Tribes have a connection to our homelands, language and ceremonies that, unfortunately, is not the norm for a majority of Native peoples.

The religion of the local people is based on individual effort through ritual cleanliness and ceremonies that include the entire tribe. The Tribes of this region practice the annual World Renewal Ceremonies, such as the Karuk Pikyavish, the Tolowa Nee-dash, the Hupa and Yurok White Deerskin Dance and most Tribes perform the Sacred Jump Dance. The purpose of the ceremonies are to renew the world or “fix the earth”, as one tribe described it. This includes songs and dances that have been preserved for countless generations.  Most of these rituals are considered to have connection with medicine. Medicine included not only that which was administered to cure sickness, but anything; root, herb, stick, or bark that is used to promote physical, mental and spiritual health. The Brush Dance is a both a social event and a healing ceremony in which the people of the local Tribes dance, sing, make medicine and pray in order to bless or heal a sick child or infant. The dance takes place in a Brush Dance pit, and it involves men, boys and young girls. The herbal healing ceremony includes singing, chanting, rhythmic dancing around the medicine fire in the pit and jumping center to confront the evil or sickness. The spectators seated on benches around the pit, also pray and help in the spiritual treatment of the child.

Native people from this region excel in basketry. Weaving and use of baskets has always been a main element of the cultures of California tribes. Our baskets are of the twined, woven type and are tight enough that they can hold water for cooking. These tribes make a wide variety of baskets from daily use such as baby baskets, collecting vessels, food bowls, cooking items, ceremonial items and we also make basket caps, which are worn by both women and also men, if open weave.

Gambling is a typical traditional recreational activity for local native people. In pre-contact times men would gamble each evening and continuing singing in the sweathouse, which served as their lodgings (men and women slept separately). Gambling today is still common. In the most popular game, players hide sticks, one specially marked, behind their backs. The opponents attempt to guess which hand holds the marked stick. Gambling, like many activities, is spiritually based and being “lucky” is more a reflection of the quality of your character than an association with random chance.

Our peoples also play an energetic fun endurance and strength game in which men or boys use carved sticks, with a small “hook” to try to throw a "tossel" (two small wooden blocks attached by a cord) across opposing goal lines despite the very physical interference of the other team.

This paper presented by André Cramblit©, Karuk Tribe. Any mistakes are mine and please let me know so I can change them. info@ncidc.org

For a pdf of this article, click here:
/sites/default/files/education_graphics/April%202015%20Local%20Tribes.pdf

The Yurok Tribe:
The Hoopa Valley Tribe:
The Tolowa Tribe:
The Wiyot Tribe:
Other California Links: